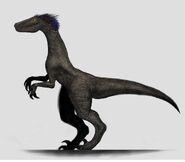 The Raptors are postulated to be remnants of the dinosaurs that fled underground during the Cretaceous–Paleogene extinction event.[1] They inhabit much of Central America and South America.[2] Some of them are like little dogs.[3] There are many different types and sizes, but the most common ones have feathered plumes. The opening to where they live is somewhere in the jungles of South America. They've been known to come out and hunt at night.[1]

They hate all reptilians. However, some broke off and allied with the Draco many years ago. Others have formed an alliance with humans, mainly the US Air Force.

Community content is available under CC-BY-SA unless otherwise noted.
Advertisement